The JSOW-ER is a powered variant of the combat-proven glide JSOW. It takes the GPS-inertial navigation system reliability of existing JSOW variants and combines it with the network-enabled maritime-interdiction capabilities currently in development for the JSOW C-1. The JSOW-ER also integrates the Hamilton-Sundstrand TJ-150 engine, currently in production for Raytheon’s Miniature Air Launched Decoy. 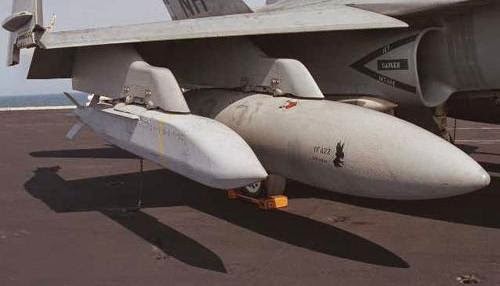 “Because JSOW-ER has the same outer mold lines and mass properties of the glide JSOW, it can be integrated on any aircraft capable of carrying glide JSOW. The cost of integration is negligible and the impact is reduced.”

“Though not a program of record. The capability and utility of a powered JSOW. Were clearly demonstrated by this free-flight demonstration,” said Capt. Mat Winter, the U.S. Navy’s Precision Strike Weapons program manager. (Raytheon)